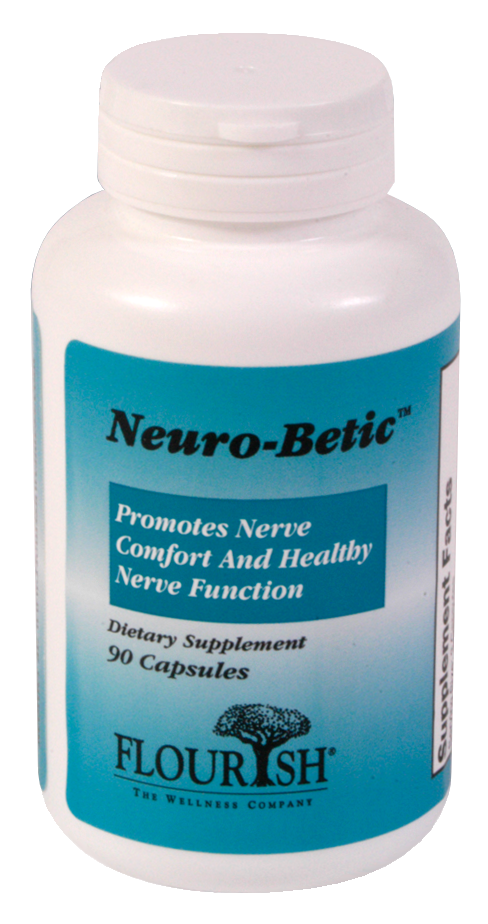 "I began using Neuro-Betic 2 years ago and wanted to tell you how much I love your product. My feet are warm and comfortable. I am so thankful for Neuro-Betic.." G. Gregg, MI

YES! I Want To Relieve My Pain
and Restore My Nerve Health
From head to toe, every part of the human body contains nerves. Nerves send signals throughout the body telling us when and how to react to triggers such as temperature, sound, and touch. They also stimulate muscle cells that allow us to move, keep our hearts beating, and digest our food. Our nerves also play an important role in urinary continence and sexual functioning.

Scientific evidence continues to accumulate supporting the positive benefits of the 11 natural ingredients in Neuro-Betic for optimal nerve health and comfort.
The strength, potency and broad range of nutrients in Neuro-Betic is difficult to match even when purchasing a combination of 4 or 5 different products.

Neuro-Betic is a natural nutritional supplement. This exclusive formula promotes and encourages the body’s ability to maintain a healthy nervous system with normal functioning.

Nutrition as it applies to the nerves is a sadly neglected affair. Any schoolchild knows he needs plenty of protein for muscle, Vitamin C for healthy gums, and calcium for strong bones. But ask him what foods are good for his nerves and chances are he doesn’t know. There are vitamins, minerals, and other nutrients that can make a difference in your nerve health. By maintaining healthy nerves you support brain function and keep your nervous system firing signals appropriately.
The most effective strategy for wellness is a comprehensive approach that includes blood sugar regulation. Maintain healthy blood sugar levels with the help of Glucobetic.
Neuro-Betic Ingredient Listing
Vitamin B1 (Benfotiamine) 30 mg – Benfotiamine is the fat soluble version of Vitamin B1 (Thiamin) which is more available to the body than its water soluble counterparts. The implication for this is that Benfotiamine is more beneficial in supporting nerve health than the water soluble forms of B1. A number of studies, in fact, have borne this out.

Vitamin B6 (Pyridoxal-5-Phosphate) 40 mg – Pyridoxal-5-Phosphate is considered the most bioavailable form of this vitamin. This is due to the fact that P-5-P is does not require prior activation by the liver to become functional, but is ready to perform its duties immediately upon ingestion.

Vitamin B12 (Methylcobalamin) 120 mcg – The most neurologically active form of Vitamin B12 is designated Methylcobalamin or methyl B12. Investigators have linked many central and peripheral neurological disorders to an insufficiency in methyl B12. Our bodies actually produce a small amount of this substance in the liver. However, much larger amounts of Methylcobalamin is said to be required to support the body’s natural ability to neutralize a substance in the body called homocysteine.

Biotin 600 mcg – An insufficiency of biotin has a dramatic effect on the nervous system. Maintaining mitochondrial health is essential for a healthy brain and nerve pathways, which require more energy than any other organ of the body. In addition, biotin assists the body’s production of fatty acids.

Alpha Lipoic Acid 600 mg – This nutrient is a key part of the metabolic machinery that turns glucose (blood sugar) into energy for the body’s needs. Alpha Lipoic offers dual antioxidant protection because it is both fat- and water-soluble. Water solubility means that it works inside the nerve cell. Its fat-solubility permits it to work outside the cell, at the membrane level. This double action on both sides of the nerve cell walls is said to result in a stronger defense against damaging free radicals.

Carnosine 100 mg – Carnosine is found in high concentrations in skeletal muscle, lenses of the eyes and the nervous system. Carnosine also acts as a significant antioxidant.

ONE TIME OFFER: You won't see this offer anywhere. Get a second bottle at a DEEP discount and... still get FREE SHIPPING. Just check the box above and it will be added to your invoice.

No questions asked. 90-day refund guaranteed on all Flourish Wellness Products. If you are unhappy for any reason, get your money back. Rock solid guarantee.

All orders are through a very secure network. Your credit card information is never stored in any way. We respect your privacy...

What Others Have Said...*

"I began using Neuro-Betic 2 years ago and wanted to tell you how much I love your product. My feet are warm and comfortable. I am so thankful for Neuro-Betic.**. G. Gregg, MI

I’m Able to Be Active Again!

"I have been using Neuro-Betic with the Super B + C tablets and I think it’s wonderful! I feel great and I would love to be able to pass along the word to everybody. I am very happy that there are no chemicals in these products and they are all natural. Thank you so much for giving me my feet back.** B. Macales, Israel

"I hate it when I run out of Neuro-Betic, because it is the “one” product that keeps my nerves in good health. I have never seen anyone else that sells a product such as yours. I would keep on using it no matter what.**   K. Martin, MT

Neuro-Betic Has Improved
My Marriage

"I was concerned about problems with intimacy in the bedroom. I started on Neuro-Betic and my married life has improved. My wife and I thank you.**    S. Walton, NJ

"We actually started out with Gluco-Betic and were so pleased that we were eager to try more products. Neuro-Betic is wonderful too. My husband’s feet feel completely normal. Your products along with a healthy diet really seem to do the trick. We just follow the serving size exactly on the bottles. We tell all our family and friends about your great products. **  E. Hand, NJ
*Information and statements regarding dietary supplements have not been evaluated by the Food and Drug Administration and are not intended to diagnose, treat, cure, or prevent any disease. Information on this site is provided for informational purposes and is not meant to substitute for the advice provided by your own physician or other medical professional. You should not use the information contained herein for diagnosing or treating a health problem, for disease, or for prescribing any medication. You should read carefully all product packaging. You should consult with a healthcare professional before starting any diet, exercise or supplementation program. Do not discontinue the use of prescription medication without the approval of your physician. **Testimonials represent a cross section of the range of results that appear to be typical with this product. Results may vary dependent upon use and commitment. ***To protect the privacy of our customers, personal images are represented by stock photographs.